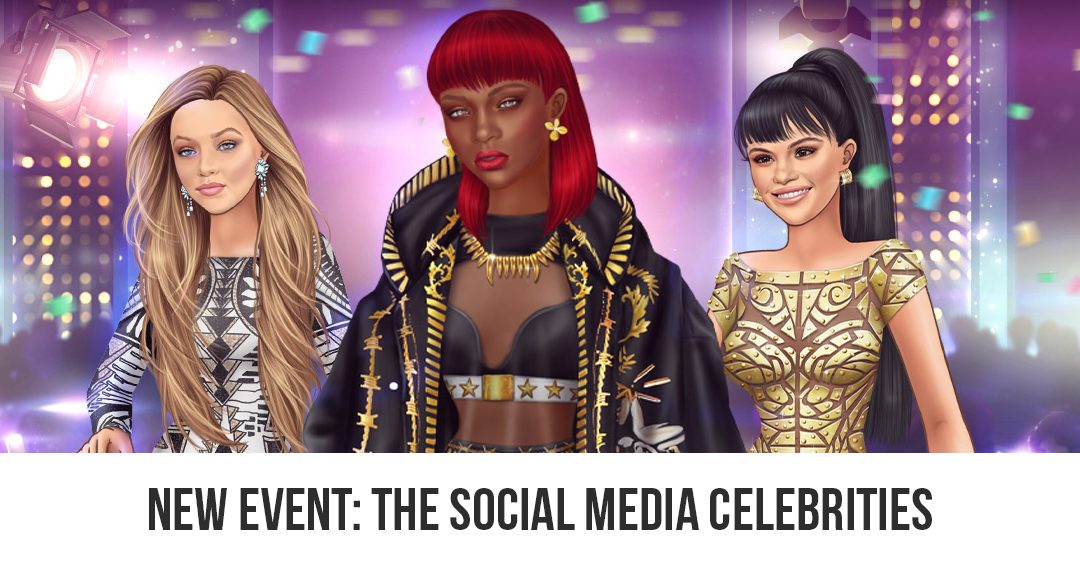 New Event is coming in the game! We will take you in the world of the Social Media Celebrities

With the beginning of the Social Media era we have the opportunity to be closer and closer to our favorite celebrities and their life. As a result, we tend to spend some significant part of our time scrolling around the different social media channels nowadays! But this isn’t something strange having in mind the huge amount of interesting content that the social media is offering to us.

Now everyone can choose the content they want to see in the social media channels based on their personal preferences and interests! Because of this we at Lady Popular, are really keen on following fashion and the showbiz. Therefore we constantly check our social media accounts to find inspiration on what will be the best thing we need to include in the game.

Here is a list of famous Social Media Celebrities who have inspired our latest event in the game:

She is a young, rich and talented Cuban-American singer and songwriter! She became famous with her being part of the music group Fifth Harmony formed on the X Factor USA in 2012. In addition to her success with Fifth Harmony, Cabello began to establish herself as a solo artist. She is part of some great collaborations with Shawn Mendes, Machine Gun Kelly, Pitbull and J Balvin. She has a stunning style, tenderness and charisma that make it one of the idols of today’s generations

Jelena Noura Hadid is an American fashion model. She is recognized as one of the biggest celebrities in the model’s world and one of the best models of her generation! She has 35 appearances on international Vogue magazine covers for a period of only 4 years! There is no doubt that she is a fashion icon and she has millions of fans around the world who are inspired by her!

She is an American media personality, model, businesswoman who gained popularity with the E! reality television series “Keeping Up with the Kardashians”. From the age of 14 she started her collaborations with different fashion brands which led to the beginning of her own brands like a line of clothing, “Kendall & Kylie” and in 2015, Jenner launched her own cosmetics line called Kylie Lip Kits.

Probably there is no need to introduce you this celebrity, but as she is one of the most famous singers and actors in the world, we will give you a brief information. Her real name is Stefani Joanne Angelina Germanotta and she is an American singer, songwriter and actress. She became really famous with her unconventionality, provocative work, and visual experimentation! Having sold 27 million albums and 146 million singles as of January 2016, Gaga is one of the world’s best-selling music artists. Her achievements include Guinness world records, Grammy Awards, Academy Award, BAFTA Award, Golden Globe Awards. We can talk about Gaga a lot, but it is a fact that she is one of the most famous social media celebrities.

Well… she is BAD GIRL RIRI! We would definitely state that she is of the most significant women who inspire us on a daily basis. Her real name is Robyn Rihanna Fenty and this little cutie is a Barbadian singer, businesswoman, fashion designer, and actress. She is known for embracing various musical styles and reinventing her image throughout her career. Born in Saint Michael and raised in Bridgetown, Barbados. Rihanna earned significant recognition following the release of her first two studio albums Music of the Sun and A Girl like Me, both of which were influenced by Caribbean music and peaked within the top ten of the US Billboard 200 chart. Having sold over 250 million records, Rihanna is one of the world’s best-selling music artists. She is the founder of nonprofit organization Clara Lionel Foundation, cosmetics brand Fenty Beauty, and fashion house Fenty under LVMH.

She is an American singer, actress and producer. Gomez has earned numerous awards throughout her career! She was the most followed Instagram user in the world before being surpassed by athlete Cristiano Ronaldo in October 2018. Gomez earns $800,000 for every single Instagram post she creates. Outside of entertainment, Gomez released her own clothing line through Kmart in 2010 and a self-titled fragrance in 2013. In 2017, she released a limited-edition collection of handbags called “Selena Grace” that she designed in collaboration with the luxury brand Coach, Inc. She has worked with various charitable organizations for years and became a UNICEF ambassador at the age of seventeen. Well Selena, your spot in this ranking is well deserved and we guess no one can dispute that!

What a great power in those tiny female hands! They are the most influential celebrities on social media! They are beautiful, rich and talented! This event is inspired by these stars and their most fashionable looks!

You know we’re always here to help, so here are a few tips to keep in mind when you start the Social Media Celebrities event:

Go to the event page and select the first zone.

You need to collect all the items in the zone, in order to receive the special reward and proceed to the next zone.

Once you select the zone you will have the opportunity to boost your deck, by purchasing some extra cards, for a few diamonds.

In order to win the special reward and beat the zone, you need to collect the Gift Card, marked with a tightly wrapped box.

To get to the Gift Card, relocate cards from the columns to the Destination pile, on the bottom right.

Start by drawing a card from your Draw deck.

You can move cards from the columns only if they are 1 rank higher or lower than the current card in the Destination Pile.

Fortunately, the cards’ suits are not a factor here. The only thing that matters is the rank of the card.

If you get stuck, the Joker card is your next move – it will accept any card on top of itself.

You can play a deck as many times as you need to, to get all the rewards in it – you’ll have one free try every 12 hours and not only one like it was before, but you can try multiple times in one day using diamonds.

So what do you think? Do you like this new event?

Share with us what do you think about it!